I’m not a big SMS guy, primarily because my brain doesn’t think well in T9 mode. Palm made SMS on the Treo 750 more like an instant messaging client, by making SMS conversations threaded. I love it. I can send a message, respond, get a response and follow the conversation even if the messages are several hours apart. Having a full keyboard gets me to use SMS, having it work more like email or instant messaging with conversation tracking makes it easy to follow what’s being said. You get a SMS thread for each conversation you’re having. The one trick I noticed in this is when someone you message sends a new message instead of replying. The new message starts a new thread even though the message was really part of the previous conversation. I’m chalking that up to a limitation of SMS at this point, but hopeful Palm can figure out a way around this in the long run.

END_OF_DOCUMENT_TOKEN_TO_BE_REPLACED

Sean writes, “Why can’t I get more than 99 photos on DVD from the Windows Media Center slide show? I’m using DVD-RW 4.7GB.”
The DVD format is limited to a maximum of 99 chapters by design. This was originally meant to subdivide a 2 hour movie into no more than 99 parts, which would mean something approaching 120 second intervals if used to the full extent. Software developers later figured out you could also use this same approach to put up to 99 still images on a DVD, one for each of the 99 chapters. Most software remains limited by the 99 chapters per movie limit. 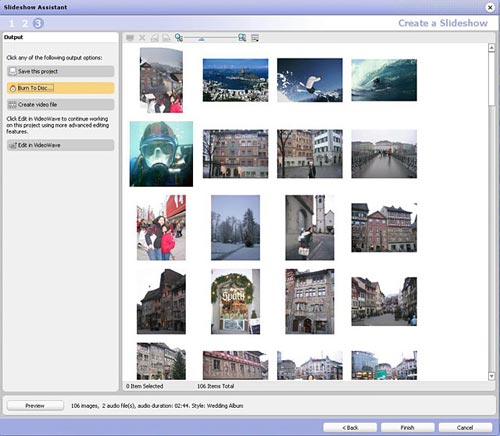 Geoff writes, “I was wondering if there is a way to burn your purchased iTunes movies to DVD?” Movie purchases

END_OF_DOCUMENT_TOKEN_TO_BE_REPLACED

Mack asks, “When using a DVD video camera are you able to edit on the disk or reuse it?”
The short answer to both questions is almost always, ‘yes’. Most of the DVD camcorders offer limited on camera editing, which generally amounts to choosing sections of video to either keep or delete. The sections you keep can then be copied to a new DVD, imported to your computer, or finalized as a finished movie.

Every year about this time I take a look at some of the most popular articles of the past year. A few of the top 10 were written in 2005, but remain among the most popular for 2006. My photo comparison of an iPod and Zune came in at #1 for the year in spite of having only 2 months to generate interest.
1) The Zune and iPod Photo Comparison remains one of the more popular posts. I’m hopeful Microsoft will announce something cool like the ability to share video downloads from Xbox Live Video Marketplace with your Zune to actually differentiate the Zune from other players. As it stands, the wireless sharing feature they tout so highly hasn’t shown much interest. I’ve never been anywhere to see another Zune in range. A friend of mine ran into another Zune owner in a public place, asked him if he could share a song, and ultimately freaked the guy out because he thought he might get a virus.
2) How to Copy Songs from Your iPod to Windows remains a popular topic. Third-party software remains the easiest way to accomplish this task.
3) How to Change the Windows XP Boot Screen is one of those customizations everyone wants to try at least once.
4)If you want to Sync Your iPod with Windows Media Player 10 (or now Windows Media Player 11) you need third party software to make it work.
5)Easy DivX to Xbox 360 Streaming is still a bit elusive. I think the Zune software makes this easier, even if you don’t have a Zune, but the best experience for all media sharing with an Xbox 360 remains via Windows Media Center Edition.
6)How to Play RMVB Files is a question on many minds. This format is growing in popularity thanks to open source Helix project. While many people in the U.S. continue to have mistrust for RealNetworks, people outside the U.S. are finding thier file formats to be among the most efficient.
7)How to Convert RMVB Files is closely related to How to Play RMVB.
8)Convert Movies for your Sony PSP remains a question on many minds. I wrote this article ages ago. The method I describe for converting PAL DVDs for PC Playback is easier for all DVDs at this point, but the PSP article has been around longer and remains more popular.
9)Easy Xbox 360 Wireless Networking is something we all need. It’s easy enough to put an Xbox 360 on your wireless network. The real trick is to have enough bandwidth to stream files to the Xbox 360 while performing other wireless tasks throughout the house.
10)How to Sync Google Calendar with Outlook is one of my personal favorite finds for the year. CompanionLink for Google Calendar is a better solution than the original free method I described.

I forgot my cell phone at home on my recent flight from Seattle to San Jose. I realized this at the Seattle airport after it was too late to go home and get it. No big deal, I thought. I’ll just pick up one of those pay-as-you-go phones in the airport while I wait for my departure time.
Wrong. According to people working in an airport shop in Seattle, it’s against the law to cell these phones in the airport. I haven’t been able to verify this, but since they sell numerous cell phone accessories, I’ll assume the clerks know what they are talking about. The implied reason was that the phones could be used for terrorist activities (presumably because you can pay cash to get one).
I might buy into this theory if it weren’t for the fact that thousands (maybe millions?) of cell phones pass through airport security on any given day. All the phones that go through security are deemed “safe”. Am I to believe that none of those phones are pay-as-you-go phones? Not likely. If we operated on the same logic used for not allowing liquids to pass beyond a security checkpoint, I should be throwing away my phone before checking in and buying a new phone on the other side. I certainly would think it is harder to misjudge a complicated electronic device like a phone before you’d mistake a bottle of water someone sips from.

When I touched down in San Jose, my first stop was a nearby Target store where I picked up the Virgin Mobile Kyocera Switch Back. I don’t think I’m ready to dump my Windows Mobile phone just yet, but I could certainly use this phone instead of many other alternatives from Cingular. The keyboard is functional, the camera takes decent pictures, and the audio quality is as good as anything else I’ve used. It even worked as my alarm clock. If the airport had carried this phone, they could have had my money instead (and required a credit card to prevent anonymity).

Vol writes, “Where can I get fonts for my Microsoft Word application?” There are thousands of sites that offer fonts

END_OF_DOCUMENT_TOKEN_TO_BE_REPLACED

Kevin asks, “Will the iRiver Clix work with Windows 2000 or only Windows XP?” 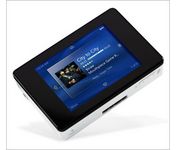 As of this writing, the only officially supported operating system for the iRiver Clix is Windows XP. This is in part because it relies on Windows Media Player 10 for syncing your music library. Presumably iRiver will extend support to include Windows Vista although the official system requirements for iRiver Clix at this point are: