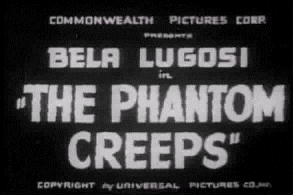 With Halloween fast approaching, I’m actively on the lookout for both creepy and campy Halloween entertainment. The Phantom Creeps, starring Bela Lugosi as scientist Dr. Alex Zorka is definitely in the latter category, with the usual over-the-top creep show we expect from one of the godfathers of spookiness. As Adam Finley once said, the doctor’s fiendish goal was to destroy the world using bad special effects. If MST3k was a favorite, you saw more than one of these episodes already; if not, you can create your own back channel. Public Domain Torrents seems to be the best place to find downloads of all the old episodes, although the image quality could be slightly better. Keep in mind you need a BitTorrent client, like uTorrent in order to download the actual movie files.

Nosferatu is by far the most accurate depiction of Bram Stoker’s Dracula, even after all the Hollywood adaptations throughout the years. Max Schreck as Count Orlok is still among the creepiest characters in movie history and the silent film format adds to the overall disturbing nature of the film. The character of Jonathan Harker is a bit over the top, in classic silent film style, but as the story progresses you quickly get past that and enjoy the sheer horror of this classic tale of terror. If you’re introducing someone to the Dracula legend this Halloween, F.W. Munarau’s film is an excellent place to start. You can watch it online in its entirety or download a version to play on an iPod or PSP from Google Video. For the best viewing experience, you can find a remastered version on DVD.

Even Borg need to dance should be the tagline of this silly video from Seattle Mind Camp 2.0. The Bleeding Edge co-host Sparky let Jesse and Nate from Hidden Frame Productions put him through a three hour make-up transformation for an upcoming movie makeup tutorial. After sitting motionless while breathing make-up fumes, Sparky appears to be so overjoyed that he takes every opportunity to dance. Could this be the second coming of the Star Wars Kid? At least the dancing Borg footage shouldn’t result in a lawsuit and out-of-court settlement. Bonus points if you can identify the voice at the beginning of the video.

If you prefer getting your tech news and information via video, Gear Live’s The Bleeding Edge may just be the show you’re looking for. Published weekly, the show provides tech news, gadgets, cool hacks, gaming information and my personal favorite segment: Breaking Stuff, where Jesse and Nate find creative ways to destroy outdated technology. Shows clock in around 30 minutes in length and feature some of the best production in online video programming currently available, in spite of giving people like me face time on the show. You’ll laugh, you’ll learn and you’ll find new ways to use everyday technology.

END_OF_DOCUMENT_TOKEN_TO_BE_REPLACED

I found out about the U.S. release of Breaking News by way of an advertisement that ran on the site. Apparently the distribution company, Palm Pictures, found the right demographic in me because I’m on record fairly regularly saying all my favorite movies are coming out of China and Korea at the moment. Breaking News is probably one of the better films from Hong Kong director, Johnny To, who has a long list of movie credits that range from exceptional to fairly lackluster. The movie is a traditional crime action flick with the cops in hot pursuit of some thieves. Nothing out of the ordinary at first, but there’s a slick twist commenting on the nature of mainstream media and propaganda used to alter the perception of things with both the police and criminals using this to their fullest advantage. Rather than being concerned with resolving a number of criminal events efficiently and safely, the lead cop (played by Canto-pop music star Kelly Chen) in charge of the investigation is putting on a “show” to maximize media exposure and make the police department look as good as possible in the process. While the story is presented with a Hong Kong twist on the events, the concept is certainly not far from what I might expect to see in coverage of criminal cases in the U.S. either. The DVD is in Cantonese with English subtitles. The original Hong Kong release came out in 2004 available for import by way of YesAsia and includes a Mandarin dubbed track. The trailer is available on YouTube.
Action/Crime – 98min
Rating – (NR)
Release Date – 2006

Watch Cherub I’m not a Joss Whedon fan. At least not the drooling fanboy type that waits with baited anticipation

END_OF_DOCUMENT_TOKEN_TO_BE_REPLACED

Possibly one of the stranger movies I’ve seen, this film breaks down human behavior and examines what make hairless apes

END_OF_DOCUMENT_TOKEN_TO_BE_REPLACED

In 1950, Richard Proennke, an Iowa native, fresh from military service, landed in Alaska with plans of starting a cattle ranch on Shuyak Island. The cattle ranch didn’t work out, but he stayed in Alaska working on the Kodiak Naval base and a variety of other jobs over the next seventeen years. At age 52, after spending a few weeks at a cabin in the Twin Lakes area, he decided to retire and move into the Alaskan wilderness for what was originally to be a year long stay. Richard built a cabin from the ground up and lived alone with the Alaskan wildlife for most of the rest of his life. He kept extensive journals and recorded movies of animals and his daily adventures throughout his experience. The journals became the basis for the 1973 book, One Man’s Wilderness by Sam Keith. The movies gradually deteriorated in storage until they were rescued by independent filmmaker Bob Swerer, who met Richard while shooting footage in Alaska for another project. Bob, with the help of Richard’s nephew as narrator, compiled the movies reels into sixty minutes of amazing documentary footage. With the movies a backdrop and Richard’s copious journal entries as subtext, the story of a man who walked away from the modern world to pursue life in the Alaskan back country is an amazing documentary. I first saw part of Alone in the Wilderness on PBS while channel surfing and was immediately sucked in. I’m not sure what compelled Richard Proennke to document everything he did in both movies and text, but the result is a glimpse at nature and the daily life of a man we wouldn’t normally meet. If you love a good story or are nostalgic for a simpler time, you owe it to yourself to watch Alone in the Wilderness at least once.

OldBoy is a movie best explained as a Korean telling of a Greek tragedy. Director Chan-wook Park is a masterful storyteller, leading us on an adventure not easily forgotten. Oh Dae-su spends a night on the town with a friend and wakes up locked in a room with no windows. The next 15 years find the television as his only companion. Daily meals sent through a slot in the door sustain his health. He watches on television the news of his wife’s murder and the presumption of his involvement in the crime since he cannot be located. To occupy his mind, he plots his escape through a hole dug in the wall and consumes all available television programming between fits of exercise. When he finally escapes, he wants to discover who did this to him and why. It’s at the point of escape where Min-sik Choi, the actor playing Oh Dae-su, turns out a marvelously manic performance that carries the rest of the movie. The why part of the question gradually reveals itself to be one of the more disturbing movie plot lines I’ve ever seen. While the movie is most definitely violent and somewhat graphic in nature, most of the really unnerving stuff takes place off screen in your mind, employing the forgotten art of suggesting violence rather than graphically depicting it. There’s no happy ending to the story, although everyone gets what they want as the story draws to a conclusion.