We all love to capture tv shows and memories on video so that we can watch them again later. But

END_OF_DOCUMENT_TOKEN_TO_BE_REPLACED

Emmet Otter’s Jug Band Christmas is quite possibly one of the greatest holiday specials ever created. While the made for

END_OF_DOCUMENT_TOKEN_TO_BE_REPLACED

Geoff writes, “I was wondering if there is a way to burn your purchased iTunes movies to DVD?” Movie purchases

END_OF_DOCUMENT_TOKEN_TO_BE_REPLACED

The theatrical release of Hollywood’s polished version of the Z-boys story may have better effects than real life and a more attractive cast of characters, but I’m still partial to this documentary. I’m too young to have experienced any of the skateboarding revolution first hand, so I can’t speak for the accuracy of this documentary’s portrayal of the Santa Monica Z-boys and their influence on skating as it has evolved today, at the same time I’m certain this is closer to the truth than the current Lords of Dogtown. Iowa doesn’t have many inground pools to skate and by the time my generation took up skating, we were building half pipes in permissive parents backyards and inviting select friends to join in the fun. The Z-boys skateboarding was stylistically different from anything else going on at the time and accounts from skateboard luminaries like Tony Hawk, and Washington DC punk rock icons Henry Rollins and Ian MacKaye suggest that the Z-boys did kick start much of what we see in skateboarding now. If you were a skateboarder in the 70’s, this should be a good trip down memory lane. If you are skateboarding today, or are the parent of one of the new generation of skateboarders, Dogtown and Z-boys offers a great historical perspective from guys who have been there-done that. Of course if you’re dying to see the Lords of Dogtown, buying the documentary gets you a movie pass good until July 15, 2005. 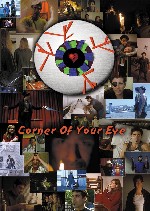 I originally reviewed Corner of Your Eye back in 2003 after visiting with the director at a cafe in San Francisco. I noticed Phlying Phrog Philmz is currently working on a second production, so this seemed like a great time to revive the write up. Corner of Your Eye is a utterly bizarre story about a love triangle resulting in the infection of three friends with a disturbing mental virus. Imagination and reality blur as the three succumb to their infection, sharing dreams and experiences beyond the state of conscious thought and reliving moments of their lives trapped in a seemingly unending cycle. Shared dreams make for some particularly surreal moments in the film, building the psychosis of each character to unnerving levels before bringing you back to the implication of reality. Repeated musical themes throughout the movie punctuate the madness of the characters as they descend further from reality and into their own confused existence. I recommend seeing Corner of Your Eye at least twice, as the plot is occasionally difficult to follow, changing things up and leaving you wondering exactly where the story is headed. This is an outstanding first effort and leaves me eager to see what’s in store from Striking 13, the next production from Corner of Your Eye writer, director, and producer Jesse Spencer. Be warned that the movie Web site contains potentially offensive words in quotes from other press.

I see these reports of people up in arms over what they can or cannot do with TV shows, music

END_OF_DOCUMENT_TOKEN_TO_BE_REPLACED

In 40 Days and 40 Nights, Matt (Josh Hartnett) makes his chosen sacrifice during Lent be to deprive himself of