END_OF_DOCUMENT_TOKEN_TO_BE_REPLACED

“How do you post a video on MyChurch?” MyChurch.org is sort of a cross between MySpace and free blogging services

END_OF_DOCUMENT_TOKEN_TO_BE_REPLACED

One of the worst parts of all online video playback is the wait. I generally have an incredibly fast connection available and yet I’m still waiting for files to playback. YouTube is one of the worst offenders because their playback is designed to feed you small file chunks as you need them. Video Accelerator for YouTube solves this problem by placing multiple requests for file parts, getting files to load and playback faster than they would without Video Accelerator for YouTube. By using this app, you spend more time watching video and less time waiting to watch video. A built-in search makes it easy to find videos from your desktop and bookmarking makes it easy to find videos you liked for a second viewing later. The premise is the same as other download accelerators – open more requests for the same file and get the whole thing faster. As of this writing, Video Accelerator for YouTube only speeds up video playback times for Windows XP and Windows 2000, but Vista support should be coming soon. [Windows 2k/XP $0.00] 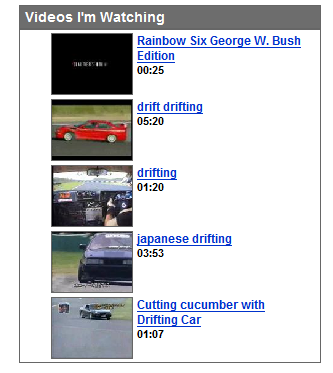 YouTube recently rolled out some new features that make the user experience a little better. The coolest of these features is something called Active Sharing which lets people see who is watching what. If you elect to turn this feature on for your YouTube account, a list of
the last 5 videos viewed shows up in the left sidebar of your Channel page similar to the example at the left here taken from my own YouTube profile. Apparently you can also see who watched videos you uploaded if A) people watching your videos have Active Sharing turned on and B) people are actually watching the videos you upload. Mashable seems thrilled about this feature, although it only really gets interesting if everybody is doing it. Here’s an example of what the who’s watching portion of Active Sharing looks like.

If you find someone with a great selection of uploaded videos, you can now sort by several options on their channel page, which is only marginally useful.
For YouTube users with tons of friends, a new feature allows friend comments to auto-approve while non-friends can remain moderated. You can now unblock people who were previously blocked, so you can re-friend someone who ticked you off.
You can see the full list of YouTube updates on the YouTube blog.

While it’s good to see YouTube evolving, they aren’t really paying attention to what users really want. Based on people who come looking for YouTube help, what I’d really like to see is a handful of improvements people desperately want. Here’s a few things they could add that would greatly improve YouTube:
1) MySpace integration. Google Video did this right. YouTube should steal the feature from Google Video and make it easy for anyone with a MySpace site to post a YouTube video.
2) Enable an Autostart feature for video sharing. The option exists, because I’ve documented how to autostart a YouTube video. YouTube should simply add this as an option when someone copies the embed code.
3) Enable a Loop feature for video sharing. Again, YouTube has this feature as an option, but they don’t make it obvious. I previously documented how to loop a YouTube video, but YouTube should make this a feature people can toggle when they embed a video without needing to edit any code.
4) Disable audio option. The number one question I can’t solve for YouTube users is how to disable the volume on an embedded video. People want to automatically start a YouTube video on their MySpace page or blog without having the audio so that they can also have a song embedded on their page. YouTube attempts to address this with AudioSwap, but this isn’t what people are looking for.
5) Real Embedded Video Playlists. Again, YouTube almost gets there with the custom playlist option, but they don’t go far enough. Not far behind the option to disable audio come requests from people who want to build a playlist of videos that play in order back-to-back. This would be easy for YouTube to do and would make multi-part videos more compelling for content creators. From a technology standpoint this is a piece of cake – Microsoft, Real and Apple have all done it for years on the server side.

Tony asks, “How do i delete a video I uploaded onto YouTube?” We’ve all had that moment where we wish

END_OF_DOCUMENT_TOKEN_TO_BE_REPLACED

Venetian writes, “I saw your instructions of how to post a video from YouTube into your blog section of MySpace.

END_OF_DOCUMENT_TOKEN_TO_BE_REPLACED

Kate writes, “I’m trying to put a YouTube video on my MySpace, but because I have a Mac, it won’t let me use advance blog, so then I can’t post the video. How do you do it on a Mac?”
If you’re using Safari on a Mac, MySpace gives you an error message like the one below when you try to post new information on your blog.

Amber asks, “I figured out how to make my YouTube video play automatically, is there a way to make it

END_OF_DOCUMENT_TOKEN_TO_BE_REPLACED

Zachary asks, “Once I have inserted a YouTube video into myspace, is there any way to get it to play

END_OF_DOCUMENT_TOKEN_TO_BE_REPLACED

Aimee writes, I have a two part question – first, how the heck do I put a YouTube video on